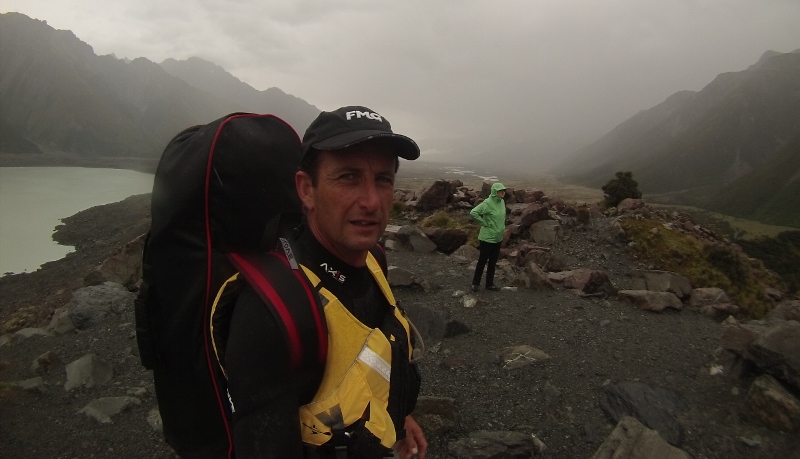 Every day is a SUP day, Even a wet and Wild one !!!  Its summer in New Zealand, but its such a diverse country you can still SUP with ice bergs in the middle of Summer. I was heading for the hills with my Red Paddle Co board on my back.  Well not really hills, these were Alps, The Southern alps that form the backbone of the South Island of New Zealand. I had found myself  at the foot of Aoraki, Mt Cook, at 3754 ms the daddy to them all.

The Attraction for me was a 30 min walk with the board rolled in its ruck sack, then a paddle to the face of the Tasman Glacier.  I headed out from the car park all kitted out , up the moraine face path to the lookout point over the lake.  The sheltered path and the moraine deposits sheltering me from the the biting cold winds roaring down the valley from the heart of the alps. Upon reaching the crest of the moraine i started to think twice of the days journey i had planned for myself. The lake was stretched out below and looked great despite the bitter wind. The weather above the Glacier was grim, foggy,cloudy, the hail and rain that had started to fall wasn’t taking any prisoners. The American couple that I chatted to thought I was mad going paddling on the lake in that weather. But the water was flat, Yeah the wind was strong, but compared to the last day of our Source 2 Sea journey down the River Severn in the UK, this water state was calm.

On arriving at the lake side jetty and planned launch site. It was deserted, except for the 4  tourist jet boat operators standing in a group. I was approached by the head Jet Boat Tour operators, who was surprised to see me descend the moraine side with ruck sack and paddle, dressed in a wet suit.  He quizzed me as to what my intentions were. I preceded to tell him of my plans to paddle to the Glacier face.  We chatted for a bit on my journey plan, experience and what emergency equipment I was carrying.  But as i started to unroll my board and start to pump it up he looked on surprised.  A coach load of Japanese tourist then walked into view so he headed back to work.

The Clouds started to lift as I headed away, I set out for a berg that I had seen on the far side of the lake from the view point above the lake.  The wind was cold and biting. So much so that my lips were stinging , the sleet that was falling side ways in the defused bright sunlight was totally out of place. Or was it me that wasn’t meant to be there. I wasn’t sure as I arrived on the far side of the lake, by the berg. But the colors of it and the wind blown shape of it fascinated me. I wanted to see more.  I set out for the long headwind paddle to the the glacier face which was obscured by the almost vertical moraine deposits on the lakes flank.

Ice floated in the cloudy sediment filled water of the glacier lake. The surface chop was no match to the paddleboard. At times you could feel the small ice chunks scrape along the bottom of the board. I just hoped no larger bergs where attached to the bottom of them. The moraine towering above me as my 12′ 6″inflatable explorer board pushed into the strong head wind with a slow but determined progress. I was amazed as I rounded the second headland to see the the glacier face at the far end of the lake peeking out from under a dark grey blanket of cloud.  The weather had deteriorated and the wind was back,  The air was electric, alive with a sound of forked lightening a rumble of thunder over head as I hit the deck. Not the place to be standing up in an electric storm.  Once again I thought twice about the journey ahead.

With the glacier face and ice bergs in view I decided to carry on.  I was so glad I did as within 10 minutes the weather had changed, the clouds had lifted and I could see the tops of the first level of peaks above.  I was living in hope that the cloud would lift completely and Aoraki, Mt Cook would appear above me.  The wind died the hail and rain cleared, in fact it was now glorious. A river was cascading down the bottom half of the moraine wall. It just appeared out of the side of the moraine wall. I guess it had always been there and one day a glacier deposited a whole pile of rocks on top of it.  It just kept on flowing and carved a tunnel through, such an amazing thing the natural environment is.

The Ice bergs started just round the corner as I headed for the glacier face.  The lake disappear off around the corner into an inlet, With the moraine wall high above me on the right and the glazier face on the left i was determined to paddle to the end of the lake.  The weather had calmed right down and it was nearly getting warm.  I pulled up behind a lump of ice and settled down to have something to drink and eat.  I called it “Cookie Time”, well it was I had a massive cookie that you can get in New Zealand shops.  It has chocolate chips in it that were in comparison to the ice bergs in the lake and were as nearly as big. I just live on Cookie Time cookies when I’m home in New Zealand. I’m not sure if its the chunks of chocolate that they have in them that i love so much or if its that they are massive.

The view was amazing, the grey,white, blue hues in the ice face, the rocks plummeting from the glaciers top edge, cracking sounds as the bounced of the ice face as the proceeded to splash into the milky brown water below. In the corner where the Ice met the moraine wall, a constant stream of falling rocks rolled cracking and banging down the rocky slope.  I felt safe tucked behind my icy shelter mid inlet. Time was creeping on.  It was time to move on. Heading off out the inlet the view was stunning, Clouds had moved off the mountains and the lake with Ice bergs dotted about looked splendid in the sun light that was filtering through the now high clouds.

I crossed the lake again to the side I had started from across the glacier face. Keeping my distance so as not to be concerned if a large chunk should fall from the glacier face. Much to my surprise I heard a very load sound of running water, It was behind me. Bewildered as to what would make this kind of noise, I turn round and looked over my shoulder to see an Ice berg rolling up out of the water. Hmm I thought, I had passed that point about and hour earlier. Never mind I thought, probably would’ve missed it as the Go pro wouldn’t have been on. Maybe it would’ve knocked me off was my next thought, Yeah that would’ve been cold.

The wind was back, but behind me this time, the clouds were still moving off the Mountains and they looked splendid. I was down winding onto the Ice bergs in the center of the lake. A large set of large bergs had grouped themselves together and these were shining nicely in the sunlight that was forcing itself through the high cloud cover. It didn’t take long till I was at their sides, a bit nervous of the one I had seen roll over. But after a while that was soon forgotten, Ice bergs are amazing, these where covered and contained tonnes of rock. They weren’t solid ice either parts of the Berg were a honeycomb of half melted ice. Some parts grey with rock and sand sediment other brilliant white. Awesome to see floating in the brown milky water that looked if you could walk on it.

The Tour jet boats were heading out for another tour as I left the Bergs and with only have the lake left to cover, with the wind behind me I was back in no time. The jetty was deserted, no one around. Guess they all went out on the Jet Boat tour. Bet they got a surprise when they came around the point and saw a new ice berg in the lake.

It was around 2 pm when I tucked my board under my arm and set off for the walk back to the car park. I had been on the lake 5 hours, lots of people were walking up to the lake as I was walking back. If only I was able to mind read. What were they thinking? A Guy walking down a mountain path with a Stand Up Paddle board under his arm dressed in a wetsuit.

Whatever they where thinking, I didn’t really care, I’d just had a brilliant day. Besides I love being “just a little bit different”.