Tay in a Day 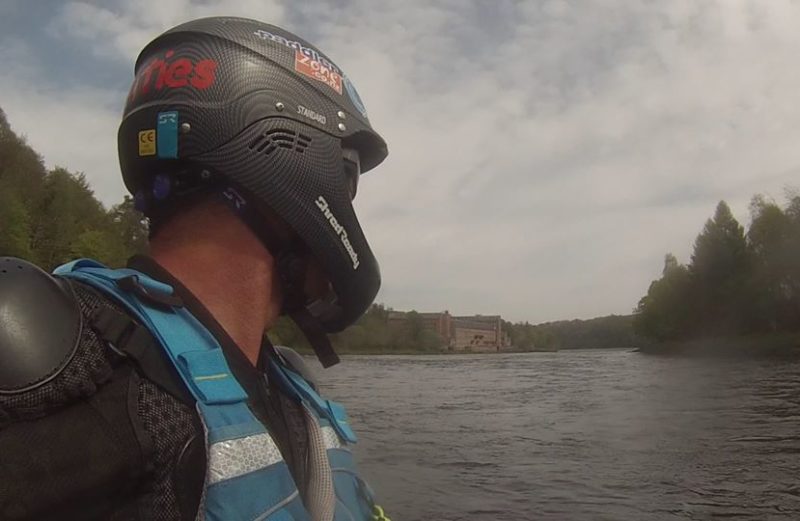 Tay in a Day

The River Tay in Scotland has got to be one of my UK favourite rivers to SUP paddle. It’s a great mix of long flat sections, amazing highland scenery and wicked white water, and it just happens to be the Longest River in Scotland. 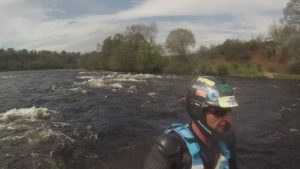 A Lochan on the slopes of Ben Lui. The Munro that name when translated into English is “Hill of the Calf” is the point of the rising of the Tay. But unlike some of my other River Journey’s I was not starting at the top of Ben Lui, my plan was to paddle the river section from Kenmore at the outlet of Loch Tay to Perth in a day.

This wasn’t my first trip to the Tay I had paddled parts of it before as part of a group. Some sections I had been over it a number of times. I had raced the Tay Descent a number of times as well, So I know it pretty well.

Paddling on a river on your own may not be the best thing to do. But when your training for an event and you aren’t planning to stop or don’t want to stop till you finish. You’re not likely to find many that will be interested in coming along or indeed be able to keep up.

My start was going to be the crack of dawn. I had stayed in a local camping ground in Aberfeldy for the night. It was very cool when I started at 4.30am I wanted to be on the water for around 6am. I had been up to the Spey Marathon in Aberlour and I was making the most of the trip to Scotland. As the Tay was on my way home to Wales then this was a great opportunity. 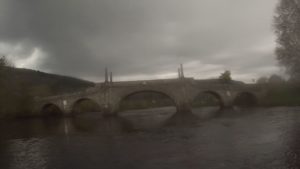 I arrived at my start point at the outlet from Loch Tay and it wasn’t long before I was on the water, the first section of the river from the Loch is an easy flat section but its not long before you start dropping into white water sections around the Taymouth Castle grounds. There are some fun sections around the Castle section and you need to be a pretty confident whitewater paddler here.

It is always best to paddle in groups and portage if you aren’t happy with the water types you come across on your trip. The river then settles a bit and there are some long flat sections a few islands to navigate, as you come round the bend at Aberfeldy and past the island Wades Bridge is the first thing you will notice. The Bridge is an impressive construction with 4 columns on it and very striking as it crosses the river. 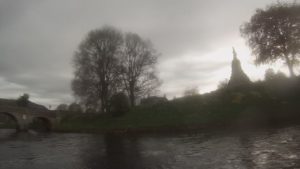 But as you approach the bridge, if you look up to your right you will also see the Black Watch monument to the men of the Black watch, formed by King George II in 1739 in the wake of the Jacobite Rebellion of 1715 the Black watch was formed of Loyal Clans. The Men had to of native blood and none other could be taken into the Black watch to watch over the Highlands.  The Monument of Private Farquhar Shaw dressed in the original uniform is a great place to stop if you need a food stop or even for a look around Aberfeldy.

As you pass under Wades bridge and you leave Aberfeldy behind, there is a long flat section till you are half way to Grandtully.  Once you get to that half way point you then have a selection of rapids to paddle and on arriving in Grandtully you want to exit river right on the bend above the next section. Best to check out this section before you decide to negotiate the river down Grandtully rapids. 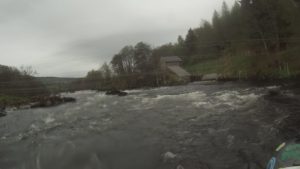 This is the home to the Scottish Canoe Association and their teams use this section of water for their white water and slalom training. I also use it for my whitewater training and one day after the junior slalom paddle session had finished, I drew quite a crowd of kayak and canoe paddlers and the parents to watch me attempt and to finally negotiate the rapids by SUP.

Grandtully is an exciting white water section but should only be attempted if you are a good paddler, confident and able to self rescue in strong flowing water. Once again take along some other paddlers to help with any rescues or just for support. 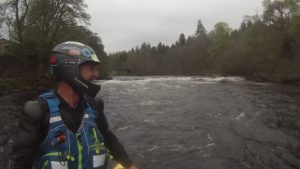 After Grandtully the wide Tay valley offers a flatter section again and the River Tummel joins the Tay’s flow volume. The flatter valley floor doesn’t mean that it is an unexciting section of river. The Tay is another high flow volume river and the well-defined river bed formed over years of flooding means there are some strong eddie lines and swift flows into corners to contend with in places.

The course of the river is followed by the A9 and it is not long before you are passing under the A9 road bridge. The wooded hillsides close in a bit here as you the tree lined river banks guide you downstream to and passed Dunkeld House and into Dunkeld itself. 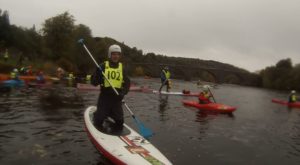 This seemed like a good place to stop for a bite to eat on my days paddle on the Tay. It is here that the long course of the Tay Decent starts. Its 38 kms from here to the get out point at the Perth water sports centre. There are 2 other shorter courses for a more relaxed paddler. But today it was just me and as I sat and ate my food on the banks near the Dunkeld Cathedral I thought how peaceful and uncrowded it was compared to the last time I had been there at the start of the Tay Descent.

The Tay Descent started in 2010 and is a great fun paddle, whether you are a wild water racer or Open boater, sea kayak paddler or just play about in whatever floats the Tay Descent has something to offer everyone.

Dunkeld on the north side and Birnam on the south, is another great place to stop and explore the heritage of the region. Dunkeld is said to be have founded in 820 AD by Caustantin Son of Fergus, King of the Picts, on an earlier site of importance. In the Vikings raid of 903 they managed to navigate to Dunkeld in one of their warships.  Clearly Dunkeld must have been an important place. 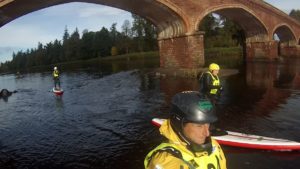 The town of Dunkeld was virtually destroyed in 1869 in the Battle of Dunkeld. If you look closely at the Cathedrals   Eastern Gable you can still see the marks the musket balls struck the stonework. In the battle. The town has since rebuilt and is now classed as one of the most complete 18th century towns in Scotland.

Today Dunkeld provides well for the tourist, plenty of shop, food and accommodation and interesting places to stay. If you are into paddling there are local companies that will guide you on the river and Lochs of the region, but a specialist on the Tay is Outdoor Explore they can provide tours at 60 locations around Scotland. 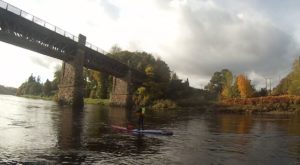 The Tay is international renowned for its Salmon fishing and is one of the best salmon rivers in the United Kingdom and western Europe, anglers are attracted from all over the world to fish in the river. As there is no fishing allowed on the river on a Sunday, That’s the best day to enjoy your paddling on the river.

Great scenery is enjoyed along the whole of the length of the Tay as well as an abundant selection of wildlife. Eagles, Osprey, Red Kites, can be seen soaring above, while closer to the river you can spot the odd Kingfisher or 2, Red squirrels are about as well and there is the obvious signs of the Beavers work and if you’re really lucky you may catch a glimpse of one. On the lower stretches of the Tay river you can even see Grey Seals and at the mouth near Dundee there have been sightings of dolphins. 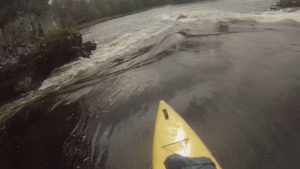 As you head south down the Tay from Dunkeld out across the lowlands of Perth shire you will have to negotiate some great white-water sections like Stanley and Campsie Linn. The various river levels can produce for some very interesting paddling. The sudden river rises caused by heavy rainfalls in the mountainous catchment area can change the river height without effecting the localised weather conditions. Its worth checking the guide books and SEPA river gauges before you paddle to get a feel for what conditions you are going to paddle on it.  If you are uncertain you can contact the local guides at “Outdoor Explore” and at Aberfeldy, “Beyond Adventure”. It may seem a bit unnecessary to employ someone to guide you on the river, but local knowledge is always King, the guides usually know all the great play spots, whirlpools, big and small surfing Waves.

The Tay has something to offer everyone, from experienced river paddler to the novice. It a good all-round river. The Tay descent is a great way to experience the river with lots of other paddlers around and marshals to watch over you as you tackle the rapids on the river. So, if you get the chance you won’t regret signing up for the event.

The bridges of Perth soon enough come into sight; the river slows above the town as the river bed flattens out. I’m not sure what it is to me that I enjoy so much about paddling under bridges. But as I pass under the bridges the satisfied feeling of another river journey is coming to a close. The town drifts past the mix of old and new building towering over you on the river. 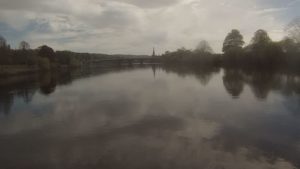 Below Perth the river becomes tidal and enters the Firth of Tay. The largest city on the river, Dundee, lies on the north bank of the Firth. On reaching the North Sea, the River Tay or Tatha (Scottish Gaelic) the longest river in Scotland has flowed 120 miles(190km) from west to east across central Scotland.

But for me Perth Water sports slip way is the end of the trip. If it is just you, it’s a long walk back to the start. But the local taxi company is available to take you back to your transport. It is a small price to Pay for a Day on the Tay !!

A video of some friends from Perch Rock Paddlers in Liverpool. When we went and did the Tay Descent in 2015

And here is a piece Scottish Canoe Association about the Tay Descent,